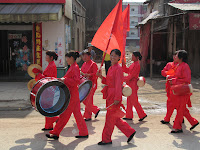 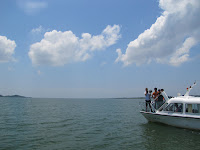 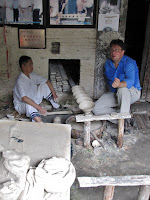 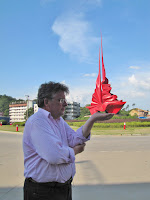 ...The British Museum!
- as announced on 15th June 2011 by Michael Portillo at the prize-giving evening at Tate Britain and on BBC Radio 4 Front Row - a winning project which places the Object centre-stage.  Congratulations to all at the BM and to all the teams working beyond its walls, not least those at the BBC who recognize that pictures in the mind are at least as potent as those we receive through the eye. Congratulations also to the other three shortlisted institutions (see earlier blog below) as well as all the museums and galleries who took part.  On accepting the £100,000 prize BM director, Neil MacGregor announced that the money would go towards other museums associated with the project beyond the BM.
_______________
This marks the end of my extended (second year) term on the Art Fund Panel  -last year under Kirsty Young, and this year under Michael Portillo.  A huge thank you to all fellow-panelists for stimulating discussions and excellent company. Congratulations also to The Art Fund, its members and generous sponsors.  Heaven knows how important the Fund continues to be in the promotion and protection of Britain's material and spiritual culture.
For the last few years Museums and Galleries have seen good times, not least thanks to grants from the Heritage Lottery Fund. Next year's Art Fund Panel (2012) will begin to discover how the Museums and Galleries sector responds to the onset of financial austerity.  A model project such as "100 Objects", with its scope for widespread adoption and development into ever growing areas of new digital media, will, I hope, inspire many institutions with simple and affordable ideas of how to promote their collections within and beyond their own walls.

Two days later (with an Antiques Roadshow at Hever Castle in between) I was off to China for the BBC...(see separate blog here in The Trumpet...)
Posted by LT at 07:29 No comments: