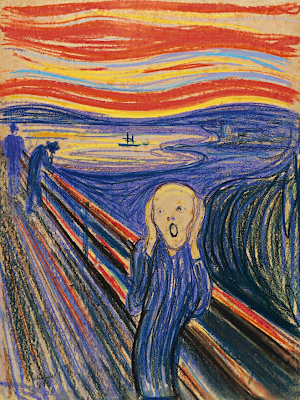 
Some artists’ images never leave us:  The Mona Lisa; The Little Mermaid; The Scream  -all three are closely linked with their ‘home’ cities  -Paris, Copenhagen and Oslo-  and all three, in different ways, have instant international recognition.  And in each an enigma:  What is Lisa smiling at?  Why is the Mermaid gazing out to sea?  And who is the skull-headed figure screaming... and screaming at what?
In Edvard Munch’s  The Scream (left*) the artist pulls the sweep of the distant bay right into the foreground, incorporating  the screamer  into a human question-mark.  Two shadowy figures have just passed by, oblivious;  they move uncaring  into the vanishing point of the esplanade on which the man stands, gripping his skull as if it might crack.  He is ‘speared’  by three  converging diagonals,  the rails of  the pier which fence and separate two contrasted fields, one of regimented straight lines, the other a sea of swirls.  A tension of horror and vertigo - the natural versus the tame world?
Why do we Scandinavians have a reputation for Melancholy?   Even in Shakespeare we see Hamlet referred to as “The gloomy Dane”  ( -well he was over-reflective, wasn’t he?  Why couldn’t he just stab old Claudius there and then and save a lot of A Level students from agonizing over whether  or not he’s mad?)   More recently, another Dane, Søren  Kierkegaard ,  anatomizes –or even invents -  Existential  Angst   launching a whole tsumani  of Modern Foreboding.


Towards the end of the 19th century the Viennese step in, exploring  the caverns of the Subconscious with Psychoanalysis while the less-than-cheery plays of Strindberg and Ibsen (both friends or subjects of Munch) continue to pour out of the North.   At  the end of Hedda Gabler , Ibsen’s heroine,  torn between stultifying  convention and sexual freedom,  shoots herself.   Whereupon the “respectable” judge mutters in disbelief “But people don’t do such things”.


Cheer up! Forget those suicidal statistics: it wasn’t just the Scandinavians who were steeped in a winter gloom.  The Russians (remember Dostoyevski?)  and the French checked into Hotel Depression too.   Nearly everyone was screaming as they all ran headlong into deadly embrace of the Great War and the end of the Old World Order.
Today Munch’s Scream is still in the top ten for students’ wall posters.  (In my day, the hippy-happy ‘70s, it was beaten by Beardsley and Mucha and by the bottom-scratching female tennis player.)  Psychiatrists do say that to get out of the dumps immerse yourself in the sympathetic darkness of a Mahler symphony;  the gloom will console you.  So maybe having The Scream on your wall makes you realise how much worse life can really be.  Or, for the same therapy, go and see a horror film.  “Scream” perhaps -though not mentioned in the credits, that elongated skull comes straight from Munch’s original image.
_______________
And while we’re having nightmares:  Imagine you’re a Scandinavian  gallery director.  One morning you’re woken up to be told that your most famous painting –the one which draws people from all over the world – has been stolen.  FOR A SECOND TIME!  Well, you’d scream, wouldn’t you?  Especially if the painting was indeed The Scream.  Reach for the Prozac…

To reinforce the power of these icons:  all three  have been pinched, vandalized or cannibalized:  the Mona Lisa was stolen in 1911 (Pablo Picasso was arrested as a suspect, though cleared); and  in the year Mona Lisa was recovered  the (very) Little Mermaid was installed on the Copenhagen waterfront.  In my lifetime she has been decapitated several times and covered top to tail in red paint.
…And returning to the Scream?  The 1893 ‘original’ (from Oslo’s National Gallery) was eventually recovered as was the version later stolen from the Munch Museum (also Oslo).  All are now behind bullet-proof glass.
And now A Fourth Version comes up for sale, painted in pastels and gouache.  Of all four versions it uniquely bears a text by the artist, inscribed on the frame:  describing his walk with two friends he ends…
… I remained behind
Shivering with Anxiety – I felt the great Scream in Nature E.M.


The picture has been in private hands since the 1920s when acquired by Thomas, father of Petter Olsen (of the shipping family) a supporter of the artist.  With its siblings’ record of multiple thefts,  this Icon of Angst goes on high security  view at Sotheby’s in London (13th-18th April) before being auctioned at Sotheby’s New York on 2nd May 2012.