My little film, Made in China... 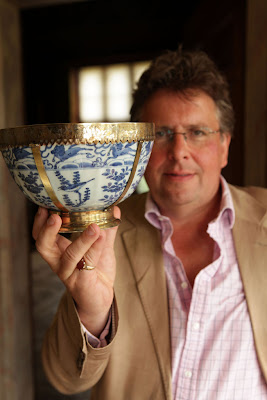 for the  B B C  FOUR
Handmade in Britain season*


Filmed in China and England earlier in 2011, I follow the trail of Chinese porcelain manufacture:  from the sourcing of china clay and china stone in the mountains of Jiangxi; to its transformation into tablewares and art objects in the city of Jingdezhen;  its 500 mile-long route along rivers, over lakes and across a mountain, all by human porterage down to Canton (Guangzhou) from where  the next leg of the China trade to Europe - another 9000 miles by sea – began.
Accompanied on board ship by all the other goods of the China Trade (notably tea, silks, lacquer ware, fans, furniture and  wallpapers) these exotic luxuries, charged with sumptuous images of the Far East gave western consumers  -the growing merchant class as well as the established aristocracy-  their first glimpses into the Celestial Empire, and changed forever our domestic interiors   -as well as establishing that oh-so-English habit of Tea.  Come on the journey. 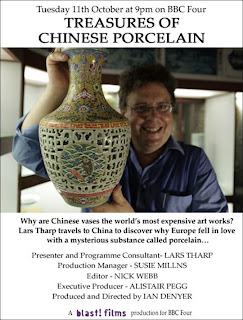 above LT with the late 16thC Chinese porcelain bowl whose story links Sir Francis Drake with Elizabeth I and Sir Walter Raleigh (courtesy of the Trustees of Burghley House, Lincs, 2011) / right  in Jingdezhen with a modern copy of a Qianlong period (1736-1795) vase which reached £43 million at auction in London in 2010

Handmade in Britain
In a major new partnership, the V&A and .B B C  FOUR  present Handmade in Britain, an ambitious year-long season exploring the history of British decorative arts. The season begins this autumn with a three-part series on British ceramics. From the history of domestic pottery to the heart of Britain’s ceramic empire in Stoke-on-Trent to the studio potters of the 20th and 21st centuries, Ceramics: A Fragile History reveals why, throughout the nation’s history, makers have created objects that are beautiful as well as functional. LT joins the "talking heads" in the series.

Treasures of Chinese Porcelain accompanies the series
For further information contact jenny.brown1@bbc.co.uk or 020 8576 2272;
or email me, lars@tharp.co.uk